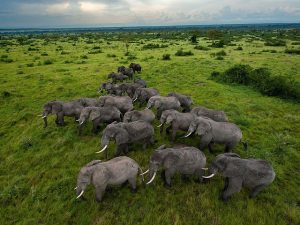 The perception of environmental problems as security issues gave rise to a powerful, but false idea that poaching is financing terrorist organizations like Al-Shabaab. The poacher-as-terrorist is extremely beneficial to conservation NGO’s, as it gives them access to the large budget that is available for security initiatives. However, their militarized approach is marginalizing local communities and is failing to protect wildlife on the long term.

Ecosystems and wildlife populations are increasingly threatened by wildlife crime, including poaching. The monetary value of environmental crime is estimated at 70 to 213 billion dollars annually, states a recent UNEP report. Just to compare: the global annual ODA budget is 135 billion. The illegal trade in wildlife has had particularly negative impacts on elephant and rhino populations, reducing the population of forest elephants by 62% between 2002 and 2011. The report shows that up to 25.000 elephants and over 1000 rhinos are killed by poachers annually.

These high numbers have caused a sense of crisis, leading governments, companies and conservation NGO’s to make use of increasingly militarized anti-poaching strategies. Researchers have noted an alarming rise of violence against both local communities and nature itself; from indirect forms of violence like displacement, to direct violence like shooting and killing poachers. ‘I think we have come to a phase where we are no longer defending wildlife, but we have become aggressors intervening in nature and the lives of communities in and around protected areas’, says Rosaleen Duffy, professor of international politics at the University of Sheffield.

The rise of militarized responses to poaching has been caused by the increasing perception of environmental problems as security issues, different researchers point out. This shift fits into the development of a global context centered on security concerns, most obvious in the US-led War on Terror, says Duffy. Also other social and environmental problems like migration, humanitarianism and health crises like Ebola have increasingly been depicted as security issues, Lunstrum points out. ‘In the case of wildlife conservation, countries with elephant, rhino and tiger populations regularly invoke the argument that wildlife constitutes an emblematic natural resource, which is central to national heritage’, explains Duffy. In the Kruger Park, which is situated at the border of South Africa and Mozambique, foreign poachers crossing the border into South Africa were depicted as a threat to national sovereignty.

Emergence of the poacher-as-terrorist narrative

‘Poachers are often depicted as heavily armed criminal gangs, making use of sophisticated technology like helicopters and night goggles’, says Duffy. ‘In fact, most poaching is done by poor people that don’t have many alternatives. Their economic alternatives might even have been taken away because of the creation of the national park [the Limpopo National Park in Mozambique] they are now living in or near.’

Poaching was first linked to terrorist groups about three years ago, when a report by the Elephant Action League, based on limited evidence,  stated that ivory was a key source of funding for Al-Shabaab. After the Al-Shabaab attack at the Westgate Mall in Nairobi, various news media claimed that saving elephants could prevent another Westgate. Since then, many governments, international organizations and environmental NGO’s have taken over the story that terrorist groups and networks like in particular Al-Shabaab, the Lord’s Resistance Army, Boko Haram and Janjaweed are financed by poaching and animal trafficking.

‘This story is just not true’, says Duffy. ‘It’s extremely harmful for local communities. They are now regarded as part of the problem, while they should be part of the solution.’ Although a recent report by UNEP and Interpol. questions the accuracy of the narrative, many institutions and organizations still spread the story because it is just too beneficial to them.

The benefits of framing nature conservation as a security issue

‘The security frame allows conservation NGO’s to get access to the much greater levels of funding that is available for security initiatives’, says Duffy. ‘Therefore, large conservation NGO’s like Conservation International and the WWF increasingly work together with private security companies.’ For governments, working with private security companies to protect wildlife has a double result, as it also serves to control protesting communities. ‘A militarized approach is very convenient to donors as well’, Duffy continues. ‘Community based approaches take years and years to show any results, while the effects of investments in military equipment lead to short term results that are easy to measure.’

Lunstrum noted how a rising number of private organizations in Southern Africa profits from the lucrative anti-poaching business. ‘Private security companies, consultancy firms and former soldiers offer their military services to governments and larger conservation NGO’s, leading to the spread of the security frame’, she says. Lunstrum is worried about how some of the military companies are exploiting the rhino crisis to greenwash their other activities. ‘By engaging in anti-poaching activities, they successfully divert our attention away from the immense negative impacts they are having in other conflicts’, she says.

According to Duffy, the persistence of the poacher-as-terrorist narrative suits the interests of some of the world’s major powers. ‘Saying you’re going somewhere to stop poaching looks better than saying you’re going to Kenya or Somalia to fight Al-Shabaab’, she says. According to Duffy, anti-poaching activities allow major powers to continue their war on terror under the guise of conservation.

The militarized response is a triple fail for wildlife, local communities and global security, claims Duffy in a recent blog for Sustainable Security: ‘Simply focusing on military-style protection of wildlife is not effective: it can produce short term protection, but ultimately undermines wildlife conservation because it pits local communities against wildlife, reducing support for wildlife amongst people who live with it: the very people conservation ultimately relies on.’

Lunstrum’s research shows that the dislocation of people living in the Limpopo National Park in Mozambique became justified because the rhino poaching crisis was framed as a security issue. ‘We tend to focus on the explicit violence of poachers being shot and killed’, Lunstrum says. ‘The creation of a buffer zone for rhino’s has resulted in a more subtle, but also much more structural form of violence, displacing thousands of people.’ Dispossession of land and houses became the logical answer to the rhino poaching crisis because the communities living in the protected areas were perceived to either harbour poachers or be poachers themselves, argues Lunstrum.

It will take years to win back the trust of affected communities, both Lunstrum and Duffy point out. ‘These communities perceive conservationists as aggressors now and will not be inclined to help them’, says Duffy. At the same time, knowledge of the local context and a local network are crucial for conservationists to do their work efficiently. The relationship between communities and conservationists was already quite fragile as protected areas have put up communities against wildlife, but it has now reached its low. According to Lunstrum, the problem is acknowledged by the authorities at Kruger park, but violence is justified because the poaching crisis is perceived as a war. ‘We’ve got to stop the bleeding’, she heard authorities claiming over and over again.

What can be done?

What can be done to win back the trust and support of communities? ‘We have to keep saying the poacher-as-terrorist narrative is false until people listen’, says Duffy. She finds some hope in the fact that some governments and NGO’s already beginning to be quite sceptical about the story. It will be a start to stop militarization of conservation, but a much bigger shift is needed.

Lunstrum points to an anti-poaching radio campaign by former Mozambican president Joaquim Chissano as a more progressive answer to the problem. The radio was sending out messages to potential and actual poachers, telling them not to take the risk as their life is valued and they are important to their families and communities. ‘It brings back humanity in the debate’, she says. ‘Hopefully, it makes people understand that poachers are not barbarians, but poor people with no alternative.’

Ultimately, the only long term solution to poaching will be to tackle the demand in East Asia. For anti-consumption campaigns to be effective, consumers should be addressed in their own terms, argues Duffy.  She points at the campaign to ban the consumption of shark fin as a successful example. ‘The ruling party in China stopped serving shark fin soup at all state banquets and wider demand reduced’, she explains. However, tackling demand will take at least a decade and elephants and rhino’s might not have that time. In the meantime, conservationists have to start engaging communities, in order to safe wildlife more effectively.